Purchasing a guitar is exciting, but can be confusing and even intimidating. The following information should help you make educated choices whether the instrument is for yourself or a gift for another.

To learn about any of the topics below, simply click on it and you will be taken to a page with further details.

A quick note: First and foremost, you want a guitar with six strings, not one with four. A guitar with four (or even five) strings is a bass guitar. They look quite similar, but are very different. A bass is MUCH lower in sound, and is played with very different techniques.

There are three basic types of guitars:

If you are purchasing an electric guitar, be sure to check out the buying a practice amp section below.

If you don’t want to purchase your first guitar online, you could do it at a local music store or even a second hand store or pawnshop. Don’t get me wrong, purchasing from an online store or catalog is great, once you are more familiar with the instruments. I think that using those vendors is great for your second instrument. A local store will allow you to hear the instrument demonstrated, allow you to play it a bit (if you’re up to it), and have a place to go to ask questions. Further, a local store will ensure the instrument is in tune when you leave which will avoid a big hurdle for many newbies. 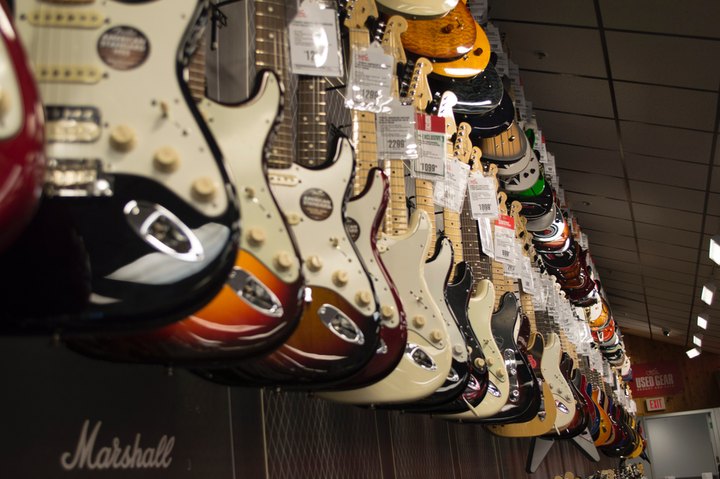 How Much Should I Pay?

I can tell you from experience that a majority of people who purchase a guitar give it up within the first month or two. Therefore, you might be better off buying a cheaper guitar to learn on. Once you know you’re going to stick with it, and have a little more experience with the makeup of the instrument, THEN buy one a little more along the lines of what you want.

That being said, you can find “beatter-uppers” acoustics and classicals starting at about $50. For an electric, you’re going to pay a bit more. You’re more likely to pay between $150-$200 by the time you buy the guitar and a practice amp.

Why Does the Price Vary so Much?

It’s AMAZING! You can walk into a store or look at a catalog and see a bunch of guitars that look very much the same. However, one piece is $140 and the next one is priced at $2,240! Wha?!? Why is that?

There are several elements that cause similar looking guitars to vary in price so much:

Neck Type: It’s hard to tell unless you look closely. Some guitars are made from one piece of wood. In other words, the neck and the body of the guitar came from the same tree. This is known as a Set Neck. Set Neck guitars tend to stay in tune better and are simply more rare. This drives the cost up. The other type of Neck is known as a Bolt On Neck. The neck and the body are two different pieces that are bolted together. Don’t be scared of a bolt on neck. The majority of guitars out there are bolt on. They’ll always hold tune well enough for us newbies.

Meterials (Wood): Different guitars are made of different types of wood. For example, some are Maple, some Rosewood, etc. The various types of wood affect the sound of the guitar in subtle ways. Of course some types of wood are more rare, and thus drive up the cost of “premium” guitars. Again, for a Newbie, the type of wood doesn’t matter very much.

There are other materials on the guitar that affect the price (the nut, bridge, etc) that I’m not going to go into detail on because (do you see a trend here) it doesn’t make a big difference for those starting out.

Pick-Ups: All Electric Guitars and some acoustic guitars have “Pick-Ups” which are basically tiny microphones that listen for the vibration of the strings and send it to an amplifier. In keeping with our running theme here, they basically don’t matter much to a beginner. The only real difference that may affect a newbie is on the electric. There are two major types of pickups; Single Coil and Double Coil (a.k.a. Humbucker)

Signature Series: Simply put, if someone famous has endorsed a guitar, you’re going to pay more.

Other Items: The above takes care of the majority of the price differences. However, the type of materials frets are made of (and their size), number of frets on the neck (yes, this varies believe it or not), type of bridge, nut, and tuning keys can all make a difference. The Color of the guitar usually does not affect the price, although some of the finer types of finishing may have a minor affect.

NEWBIE SUMMARY: In general, don’t worry too much about the materials, pickups, or other things. It was explained here mostly to satisfy curiosity. As someone new to the guitar, basically decide if you want an acoustic, electric, or classical guitar, and then purchase one of the least expensive models you can find. Later, once you have stuck with it and discovered the musician buried within you, you can pick up something “better”.

OK, so you’re at the store, and you have a guitar in your hand. Now you’re looking at the racks near the register that have TONS of interesting looking gadgets that you can buy along with the guitar. You say to yourself “I’m shelling out for this… I might as well get some of those, too…”.

Well, let’s look at what you need and don’t need to get started. 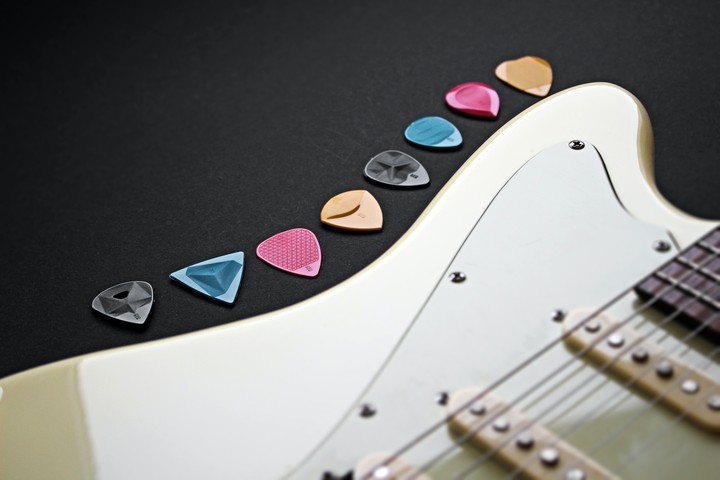 You may want (these are reasonable to pickup with your first guitar):

Don’t let them talk you into:

O.K. So now, hopefully, you are armed with enough info to make a good decision when buying that thang! Remember to enjoy the process and try not to be too anxious.