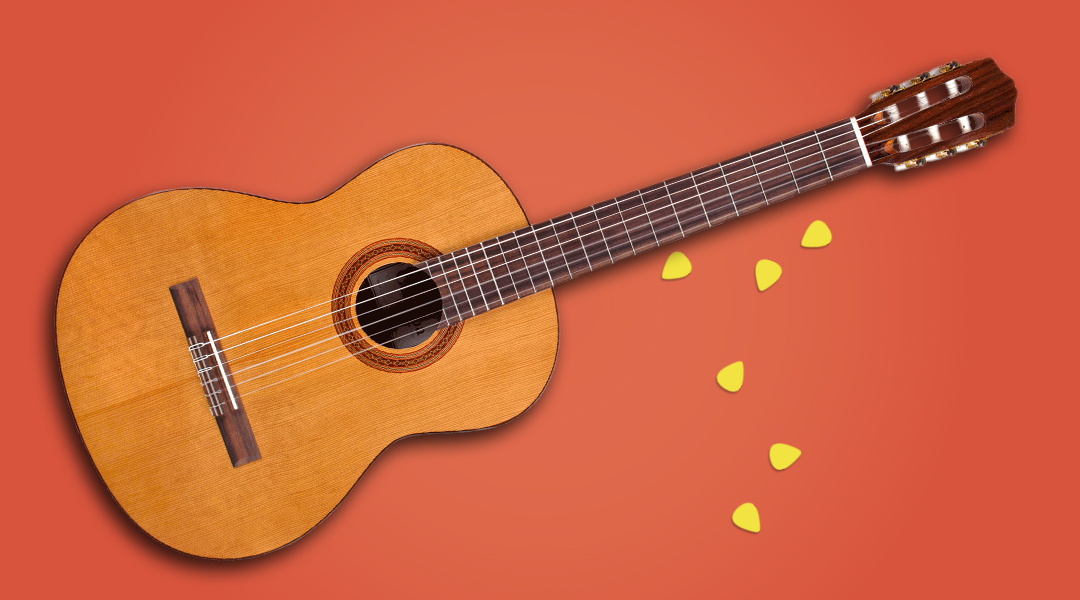 The Cordoba C5 Classical Guitar is a full-sized acoustic nylon guitar that claims to blend the craftsmanship of traditional luthiers with more modern construction techniques.

Cordoba Guitars is a relatively new brand for classical acoustic guitars – being started up in 1997. Inspired by the beauty of purely acoustic instruments, Corboda guitars are a direct descendent of the Classical Spanish tradition and employ top luthiers such as Edmund Blöchinger, Kenny Hill, and Tim Miklaucic.

The C5 is one of the original designs of the company and it features a solid Canadian cedar top, mahogany back and sides, and a rosewood fretboard. The guitar also has an all-wood rosette inlay, rosewood bindings, and a bone nut and bridge saddle. The Cordoba C5 Classical Guitar is -of course- entirely handmade, fitting in with the original Spanish guitar style, and has a beautifully hand-carved headstock. Inside the body is a fan bracing system (not X-bracing as you’d find on a steel-strung acoustic). Canadian cedar is a wood that is widely used in classical guitar soundboards, and the coloration ranges from very light, to dark reddish-brown. Also known as ‘Western Red Cedar’, this tonewood tends to have an open sound that is rich in harmonics- which can be somewhat lacking in a brand new spruce top. Compared to a spruce top (which you’re more likely to find on a steel-strung acoustic), Canadian cedar sounds warmer and sweeter, with richer overtones and harmonics, but a weaker fundamental. This means, in a nutshell, that the original tone of the string is very slightly weaker, but the overtones and resonances are much stronger with this wood. Also, the African mahogany used for the back and sides of this guitar has somewhat the opposite properties. It will tend to emphasize the fundamental tone and doesn’t resonate with so many overtones. So this guitar is made with a good combination of complimentary tonewoods, for a rounder, more complete sound.

Also, this guitar features a bone nut and bridge saddle (the part that the strings go over at the head and the bridge, respectively). This is the higher quality option for nuts and saddles- cheaper guitar use plastic. In fact, even guitars that are double this price use plastic nuts, which is a real shame for their tone.

The internal fan-bracing of this guitar is fairly traditional on a regular classical guitar, however, this instrument also comes with a truss rod- which only really usually comes on steel-strung guitars. Yes, this does mean that you have the option to adjust the neck if something goes wrong (although we recommend leaving a truss rod adjustment to a professional!), but on the other hand, why should you need to?

The traditional fan bracing system allows the soundboard to vibrate more freely than an x-bracing system would, however, it is also weaker by design. It’s a trade-off between sound quality and design strength (of course, this guitar is no weaker than any other classical guitar!).

The first thing that we noticed about the Cordoba Classical Guitar is that it features a truss rod. Now, this is very unusual for a nylon-strung acoustic as truss rods are usually used to counteract the higher tension of steel strings. The ‘truss rod’ is a long metal rod that runs through the neck of the guitar in order to strengthen it against higher tensions. It can also be used to adjust the curvature of the neck by tightening or loosening the rod. We don’t recommend playing around with this feature unless you’re an expert, as you can do permanent damage to the instrument if you do it wrong! This feature- although unusual- makes it possible to adjust the intonation of the guitar is poorly set up or damaged. So, it’s a great feature as some may need slight adjustments after leaving the shop.

The Cordoba C5 Classical Guitar has a wide neck, as you would expect on a classical guitar, but the nut width is pretty standard for a nylon-strung guitar. The action is fairly low, which makes the guitar easier to play as the strings are easier to hold down. The Cordoba C5 has a very resonant and clear tone with a deep bass sound, and the sound projects out really well. I mean, for this price you could expect much less from the sound of the guitar! It doesn’t buzz on any of the strings, and there are no strange sympathetic resonances distracting from the tone.

The gig bag is nice and thick, with great padding and two shoulder straps to carry it on your back, or handles to carry it in your hand. It’s a high-quality soft case for one that just comes with the guitar as an extra- too often you would need to buy a case separately because of the low quality of the case a guitar comes with. Not here!

Most of the problems with this guitar relate to the setup and construction. As I said before, it is a bit strange to have a truss rod in a nylon-strung guitar. Maybe the neck is under more tension than it should usually be?

There are reports of this guitar warping, or even breaking entirely from the string tension… but on the other hand, after a good setup, a lot of these potential issues can be resolved without too much fuss (or money).

Yes, the action of this guitar is low for a classical guitar, but the strings are quite tight (which makes them harder to play), and as you go further up the neck (towards the body) or try some more advanced techniques, the sound and playability do suffer considerably. This guitar can also suffer from some tuning issues, and the frets are rough to touch with some being higher than others.

As I mentioned earlier, these things can be fixed pretty easily by a decent setup – and you’ll likely not even notice when playing easier pieces that mostly use the first position and open strings anyway.

This guitar is nearer the top end of the ‘beginner’ price range (I would say beginner to intermediate) and can give you some great tones that wouldn’t otherwise be possible without spending nearly $1000. However, the Cordoba C5 Classical guitar does suffer from some setup and construction issues that may deter the more advanced player who doesn’t want to give the guitar a good setup before playing it.